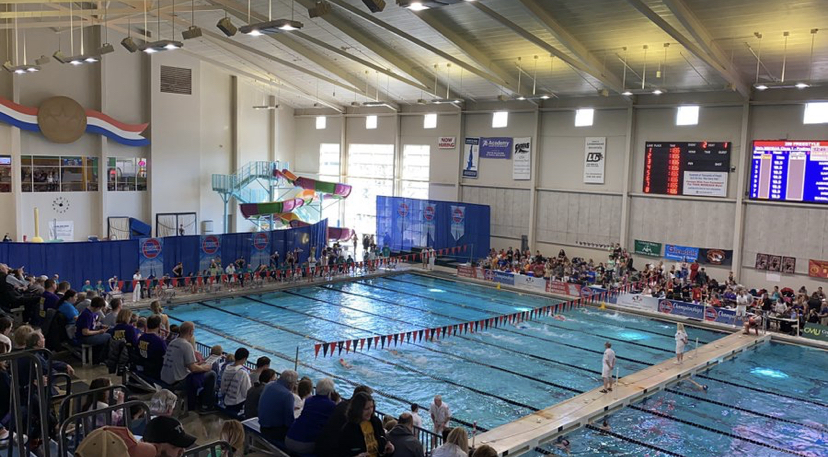 Junior Aubrie Moreland gets ready to go in Lane 5 during the freestyle. "“I worked on my times and focused on my best events this season. I sometimes did extra training outside of practice like lifting weights and extra pool time," Moreland said. Moreland competes on the weekend of Feb. 21.

As winter sports come to an end, it’s time for the dedicated athletes to get a shot at the state competition. Members from WHS’s wrestling, dance and girls swim teams qualified this year, and are hoping their hard work pays off this weekend.

“It’s really exciting. It’s just like a big deal because I made it for cross-country and I made it for wrestling, and I’m hoping to make it for track,” junior Mia Reed said. “It’s fun because it’s all year round and you just keep going after it.

Reed has been wrestling for four years now and is up for her second shot at the state competition after also qualifying in 2019. Her years of work on the mats have had a large impact on her overall skill set.

“The way I’ve improved is that in a neutral position I know more offensive attacks instead of being more defensive, which is how I wrestled last year,” Reed said. “All that took was just doing it in practice, and that helped me a lot more and that’s why my record is a lot better this year.”

State competitions can be nerve-wracking, but for those who have been athletes since a young age, it only presents another chance to succeed. Junior Aubrie Moreland has been swimming competitively since the age of five and is the only member of the girls swim team who qualified for state this year.

“The girls on the team have been really good supporters, and my family is always amazing,” Moreland said. “My goal for this sport is to always keep improving and help my team become the best they can be.”

This is year will be the fourth year in a row for the WHS Jaywalkers to compete at state, and they all share a common goal.

“We haven’t placed high enough to get a board for the time that I’ve been on the team, but [from the beginning] we said our goal was to get a board in the gym,” senior Megan Duncan said. “We want everybody to have that. So we decided that we were going to keep going. We got our dance choreograph this year by someone specific, she came in and did it for us, so we’ve just been doing a bunch of things to help keep us motivated and wanting to go throughout the year.”

The Jaywalkers have been working hard as a team this year and have gone as far as including new things to practices and even coming to the high school on Sundays to get more work in.

“We have been doing a bunch of different stretches, and we focused on our core a lot this year,” Duncan said. “Something really important in dance is releve, and you have to have really strong legs to be able to do it. So we’ve been working on the small things, but the small things really add up to something big in the end when we do the two-minute routines.”

Despite a team’s work done together, individual athletes have found that there is something in it to improve themselves as well.

“I really hope that we do get a board, but I think that it was more about showing myself that I could commit to something and do it all year for four years, because dance it a year-round sport,” Duncan said. “It really was just to show myself that I can do something and I can succeed at it.”